I had a great commission from GP Racing magazine to follow F1 champion Nigel Mansell’s weekend at the Goodwood Festival of Speed documenting all the highlights as he drove his championship winning Williams FW14B for the first time in many years.

Sounds straightforward but, at a event with 150,00 visitors and an ever changing schedule, it proved trickier than I planned. With cars going up the hill twice a day over the the three day event I was pretty confident I’d have plenty of chances to shoot the imagery required for a six page feature. I started off in the Williams pit tent to say hi to the team and explain what had been pre-planned to find out that Mansell was now only driving the car on Sunday , knocking out 4 out of my 6 opportunities.

There were many good things going for me. The weather was great…not too hot, or cold or raining and I knew my way around having covered the Festival of Speed more than 20 times, I had all right track side passes allowing me into the assembly areas to get up close and personal to Nigel. But come Sunday the news came through that Mansell would now only drive the car once, for the afternoon run and I started to get a little worried.

I was pretty sure I could get all the pre-run imagery of the car being brought down to the assembly area and ‘Our Nige’ getting into the car and heading out onto the hill but with just a single pass I would only have one chance to shoot the necessary action photos that would almost certainly be the lead image of the feature.

I placed myself track side opposite Goodwood house for the drive by…close enough to run from the assembly area and the best chance of seeing the car for the longest time as it passed at speed. Action photography is not an exact science and I didn’t want to freeze the car with a high shutter speed that would guarantee a sharp image but lack any movement.So I covered other areas by speaking to other snappers who would be in different spots up the hill asking them to send me their images …just in case.

I needn’t have worried, I got the shot and hitched a ride up to the top paddock in the team support van to photograph all the atmosphere there before heading back down to the house for the interview on the balcony in front of thousands of fans.

In the hectic world of Formula One, January is a quieter time of year for the teams and it proved the right moment to photograph some more cars for GP Racing magazine’s ‘Now That Was A Car !’ feature.

So this week I visited Williams F1’s Grove HQ in Oxfordshire with photo assistant Rachel to shoot classic F1 cars in their superb museum.

With no one available to move the cars around we had no choice but to shoot each car on the list in the position it was set in the display. I’d usually set up black backgrounds and create a bed sheet lightbox, as I did at Mercedes,(https://www.jamesmann.com/2020/02/01/lewis-hamiltons-f1-championship-winnign-mercedes/) but there was no space to do this so we had to use more flash heads to light each panel.

Our target was to photograph three cars in a day FW10, FW15 and FW19 so we had to work fast. Using flash speeds things up as you don’t need to worry about using a tripod so it was all about maximising the number of angles and details we could manage shooting around the other exhibits.

Rachel and I have worked together on many projects but she has never worked this way before so it was a steep learning curve but we had captured our three cars by mid afternoon and managed to photograph a fourth car, FW09, below with minutes to go before our 4pm deadline. Here’s the retouched image below.

The few weeks ago I got the opportunity to photograph Lewis Hamilton’s 2019 F1 championship winning car at a secret location in the UK.

As is often the case there is neither the time or the funds available to bring the car to a studio so I built a studio around the car. When I say studio it is the bare essentials of what I need to capture the image.Lighting is by flash either direct through softboxes or bounced into a white sheet behind the car.

It’s not perfect and my technique relies on my 30 years plus of experience of knowing what’s important to spend time on and what’s not.My friend Rob came along as assistant and we wrapped up the shoot with minimum fuss in just under four hours.

Here’s the final retouched head on image. You may notice that the car is still quite dirty… actually it is uncleaned from the final race of the F1 season in Abu Dhabi. Lewis won it with Max Verstappen second in the Red Bull Honda and Charles Leclerc’s Ferrari taking the final podium spot.

I’ve been finishing the final shoots for the update of my ‘Art of the F1 Race Car’ book and had another two icons of Formula One in the studio. First up was Red Bull’s championship winning RB6 as driven by Sebastion Vettel to victory in 2010. Who was to know that Adrian Newey’s stunning design would dominate the sport for three further years to come.Check out the portfolio page to see a sneak preview of  Vettel’s car. Also very privileged to get our cameras onto this year’s Kimi Raikkonen Lotus resplendent in it’s JPS inspired black and gold livery.Lotus sent their full F1 rig and and 5 staff to look after the car.

I’ve been working on an update of my award winning 2010 book ‘Art of the F1 Race Car’ shooting a bunch of Formula One cars to be added .The book is set against a black background but I recently had a contact from an old friend who now works for top London re-touchers Taylor James asking if I had any car images he could hone his art on so I sent him the raw files from the Brawn shoot. The results are amazing and can be seen on my studio portfolio web page….I’ve no idea how he got there from the image I gave him ….see below.! 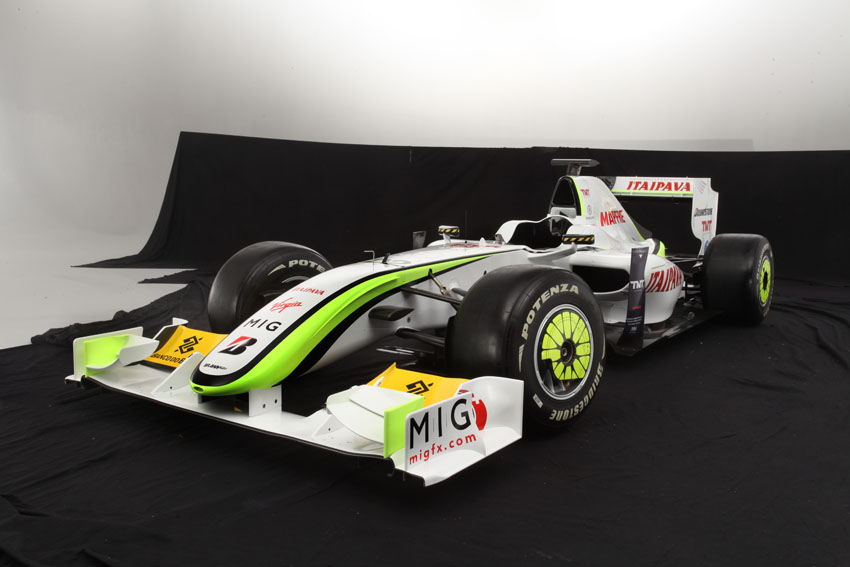 Button’s F1 car in the studio before re-touching 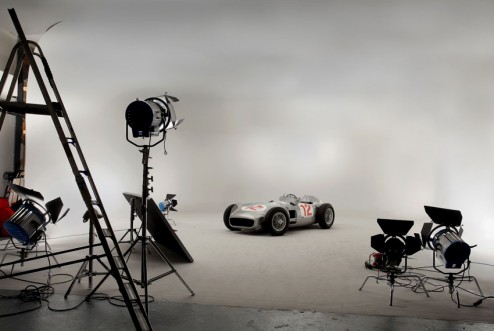