The 1959 Aston Martin DBR1 is one of the beautiful and valuable sports racing cars in the world and I had the enormous privilege of shooting the actual Le Mans winning David Brown works team car for my book The Art of the Le Mans Racing Car.

The DBR1 had been driven to victory by the unlikely coupling of Brit’ Roy Salvadori and American Carroll Shelby.Like most drivers of the day they did not just drive for one team and Salvadori achieved success in a wide variety of sports racing to F1 cars including Maserati 250F and Ferrari 225 to Cooper-Climax and latterly Jaguar saloon cars. Likewise Texan Shelby raced in all motorsports from F1 to hill-climbing and rallying and whilst competing in the fearsome Carrera Panamericana suffered a bad accident in an Austin Healey that left him in hospital for 8 months.

Remarkably Salvadori, who drove for 14 hours of the 24 hours of the race, was suffering from the flu and Shelby had a bout of dysentery and had tucked a nitroglycerine pill under his tongue in case his heart problem flared up during his stints.

Seen above is the raw un-retouched image of the car in the infinity cove studio on a black cloth background with the bonnet removed.I’d had an idea to create a layered image with bonnet on and off but had been too busy to develop the idea at the time.

The technique uses Photoshop to layer the image one on top of the other and adjust the opacity to allow you to see through the bonnet to the engine bay and takes a long time to get it right. Here’s the final comp’ image and there’s another taken from overhead in Portfolio One on this website.

It was a great coup to get to shoot this year’s Le Mans winning Audi R18 e-tron quattro for the Legends of Le Mans book.In a grand tour of Europe covering 2500 miles ,James has been photographing the last few cars for his upcoming studio art book, including a stunning 1920’s Lorraine Dietrich B3-6, a Mercedes SSK once owned by Sir Malcolm Campbell, the 2005 winning Peugeot 905HDi and the stunning Audi R8 and R18 e-tron quattro. 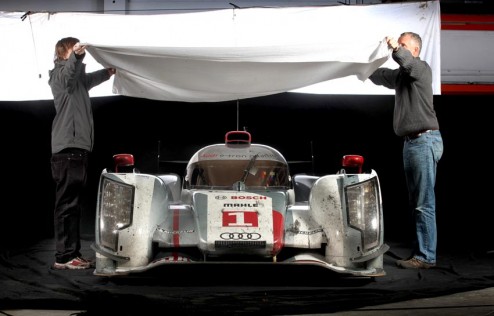 After almost a year of planning James has started shooting his new studio book this month.To be called ‘Legends of Le Mans’ the book will feature up to 25 of the world greatest sports racing cars from throughout the 90 year history of endurance racing at La Sarthe photographed in the studio.Seen here is the 1970 Porsche 917K which won the race after 24hours and 343 laps with Hans Hermann and Richard Attwood at the wheel. 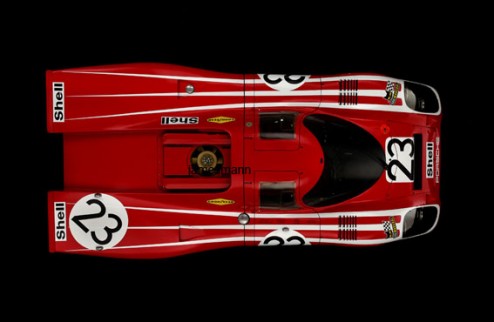