Just got back from photographing the fabulous Sunbeam ‘Tiger’ land speed record car out for the first time in years . It was running on Ainsdale beach near Southport exactly 90 years to the day since Sir Henry Segrave drove it to 152.3 mph to clinch the record and was part of the brand new Southport Festival of Speed to celebrate racing in the northern seaside town over the years. The ‘Tiger’ features a 4 litre quad cam dry sump supercharged V12 beast of an engine specially built in 1925 for Segrave by the Wolverhampton based firm and was originally named ‘Ladybird’. 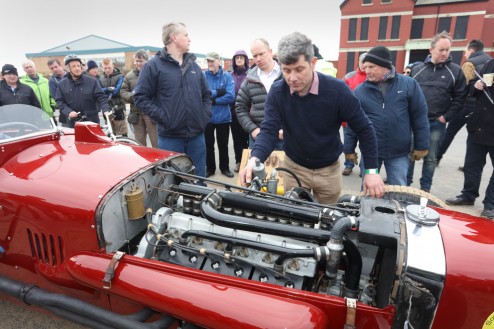 The car is currently owned by the Force India F1 team principal Vijay Mallya who has restored the car and was driven on the day by curator Malcolm Page who looks after the Mallya collection. Starting procedure is complicated for this highly advanced racing engine involving fitting a separate carburetor and changing from soft to hard spark plug once the engine is warmed up.With vintage specialist Nick Benwell and others helping, the glorious engine fired up without too much fuss and this Historic car once more roared onto the Southport sands again. 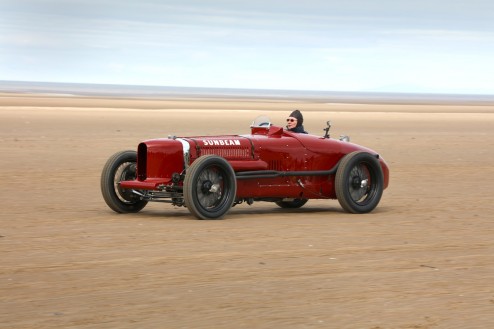 I’ve recently been out to one of my favourite race circuits for a shoot with the epic 1971 Ferrari 512M. Circuit Paul Ricard is set in the mountains at Le Castellet behind Marseilles in the South of France and is reminiscent of Laguna Seca in California with its mountain air and clarity of light although the track is flatter and more open. Dramatically painted run off areas highlight the corners and the atmosphere in the paddock is typically Prevencal with a long break for ‘Dejeuner’ always scheduled into the program. I arrived at dawn and woke Tim Samways’s transporter driver who sportingly agreed to unload the car for me to start shooting statics in the creamy early light.Track time was arranged between 12-1.00pm but the car only arrived in the pit lane at 12.50 pm giving us only enough time for just one lap for car to car photography…which was sufficient. Just fifteen 512Ss were converted into M spec in 1971 and with over 600bhp on tap through the quad cam five litre V12 engine…we tiptoed our way around the track, the glorious song of the Italian race tuned V12 the only noise shattering the silence of the important procession of lunch. 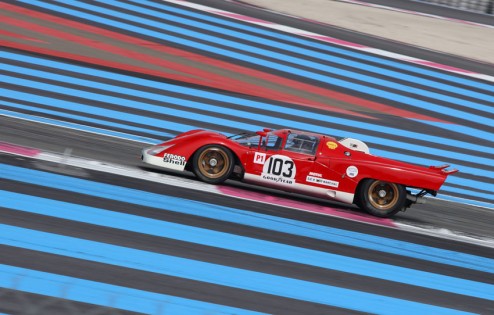 After over a 100 years without turning a wheel the Beast of Turin was back  in England with a vengeance racing at the Goodwood Festival of Speed and wowing the crowds with it’s deafening flame spitting roar. The stats are incredible for the Fiat leviathon with over 300HP on tap from it’s monster 28.4 litre four cylinder engine. The car has been rebuilt by Duncan Pittaway over the past 10 years after he discovered the chassis in Australia ,where it had been campaigned as the Fiat racing special, and matched it with the original engine. A pair of Fiat S76s were built in 1910 to snatch the flying mile and flying kilometre speed records back from the dominant Blitzen Benzs and Pietro Bordino drove the Beast at Saltburn Sands in Yorkshire in 1911 finally taking an unofficial record in Belgium at over 135mph. 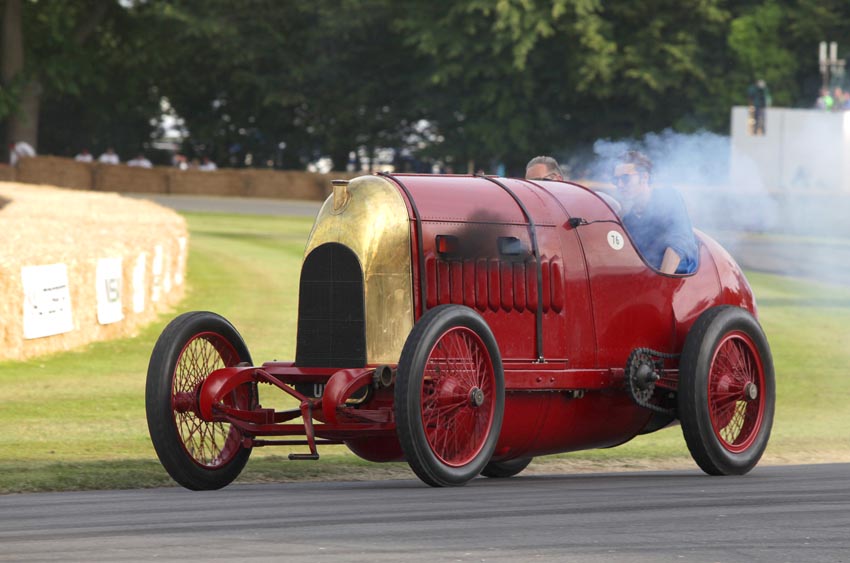 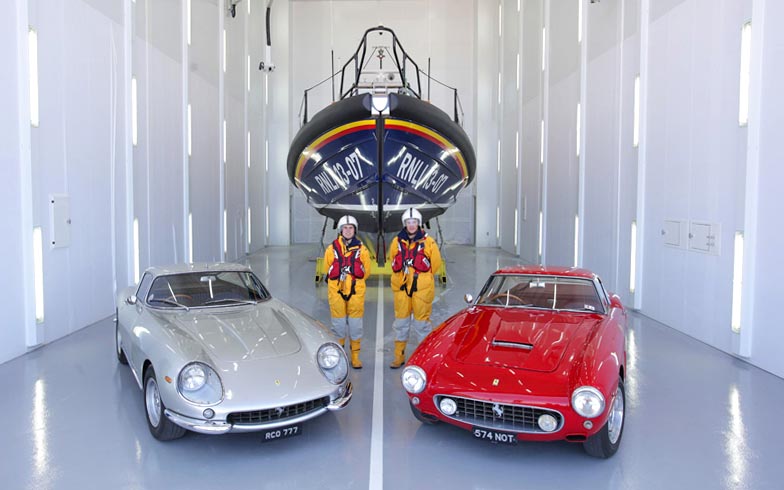 I was re-united with an old friend recently when I was asked to photograph the 1970 Le Mans winning Porsche 917K in the studio for a book. I’ve shot it before for my ‘Art of the Le Mans Race Car’ book a few years back and it was good to be reacquainted and have a whole day to enjoy capturing it’s awesome architecture.I always love to see proper racing cars in the studio away from their natural environment on the track as it gives you time and space to admire the design behind the engineering in greater detail. Sitting in the hot seat I tried to imagine what it would have been like to be Richard Attwood or Hermann Lang hurtling down the Mulsanne straight at nearly 250mph with that sonorous flat 12 on song behind pushing me to victory. Just 25 917’s were built and it is considered to be the finest racing sports car ever made…..hard to argue with that. 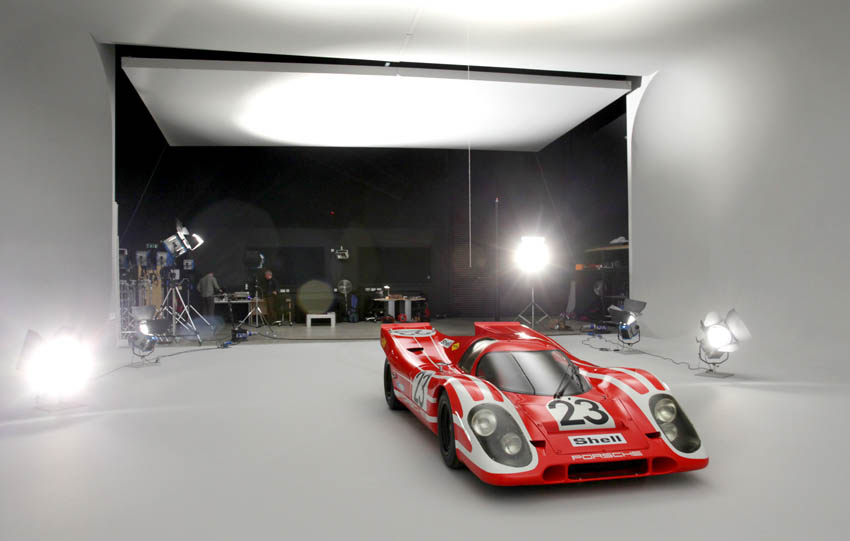 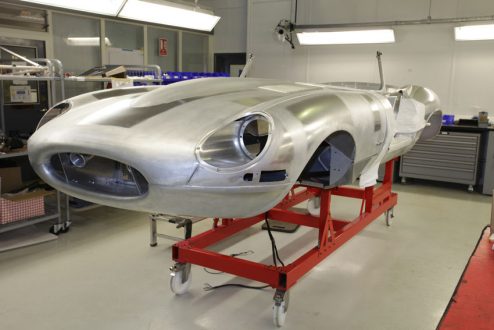 I’ve spent the winter writing and compiling photographs for a new book about Jaguar cars. It features every model from the first Swallow side-car in 1922 right up to the very latest F Type convertible and I’ve been photographing cars to fill gaps in my archive. Jaguar Heritage have been very helpful with access to some of the early SS models but whilst I was up at their old Brown’s Lane special operations department I got a sneak preview of the new light weight E Types being built. These are six brand new chassis to complete the series of 18 that was started in back in 1963, manufactured in aluminium to the exact specifications of the original cars they will even be allocated the missing chassis numbers making them eligible for classic racing events.

I’m working on a fantastic new book about 50 years of the Lamborghini Super Cars.Most are being photographed in the studio, check out my portfolio to see a few preview images,but some we’ve had to shoot on location as with this amazing very early Countach P400. Designed by Marcello Gandini at Bertone in 1974 it was a huge step forward in super car styling and was to remain in production for an incredible 16 years influencing many other automobile draughtsmen. This car was originally termed Periscopica as it was meant to have a periscope for rear vision but this proved impractical for production and it was dropped. I reckon Ferruccio would have approved of this pairing. 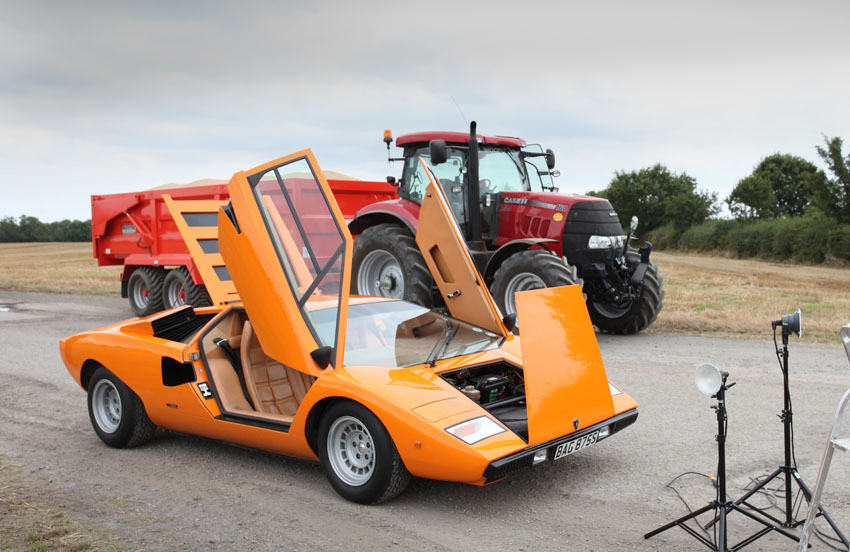 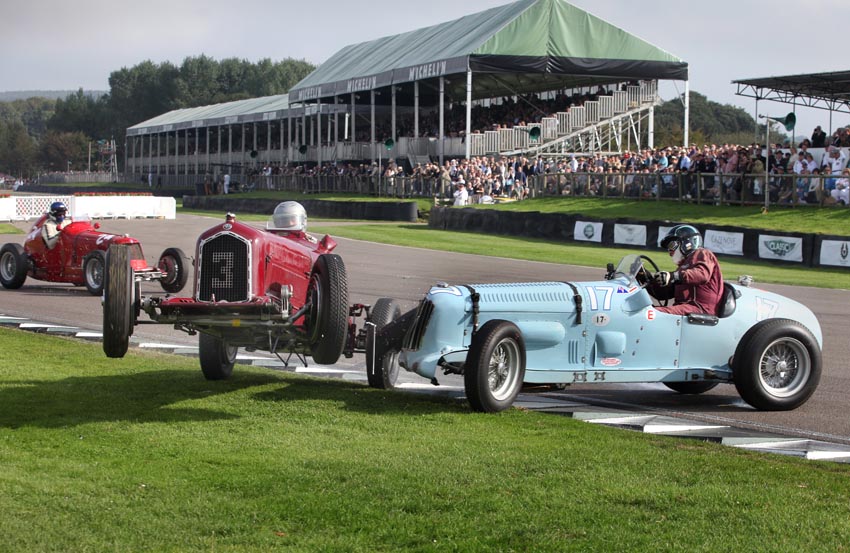 A 1953 Maserati A6 GCS Berlinetta won the top prize at this year’s Cartier Style et Luxe concours d’elegance at the Goodwood Festival of Speed.One of only four made the car’s stunning lines were penned by Pininfarina and it featured the short stroke straight six 2 litre Maserati engine developing 170hp.The win also celebrated 100 years since Maserati was founded in 1914. Amongst the judges are Rowan Atkinson,Lord Anthony Bamford and Sir Chris Hoy. 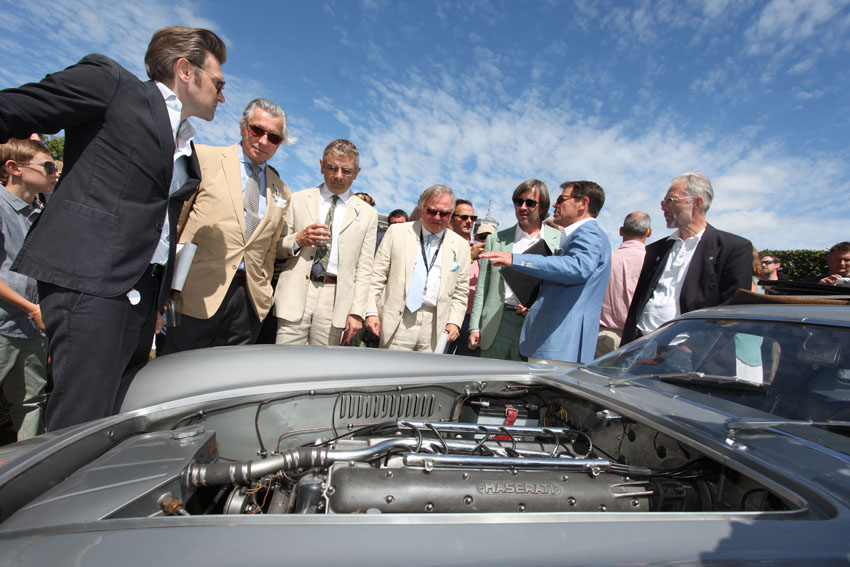 I had a great shoot the other day at Sywell aerodrome in Northamptonshire with a pair of the upgraded 1970’s classic fast cruisers.Jensen Interceptors were one of the first British super cars in their day paring European styling and build with an American power train.The re-engineered cars start with an original car which is stripped to it’s component parts and rebuilt to modern specifications incorporating rust prevention, upgraded bakes,suspension and steering as well the latest GM V8 as found in the Corvette.You can have a normally aspirated model or a supercharged unit kicking out an incredible 550BHP. 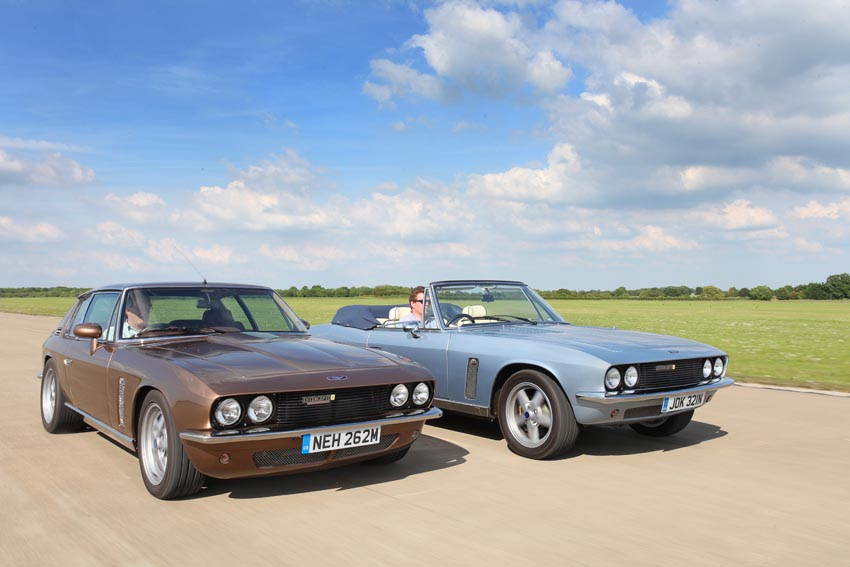 Sir Stirling Moss enraptured guests in the Credit Suisse drivers club with his reminiscences of racing in Monte Carlo over the recent Monaco historic grand prix weekend.Speaking with Henry Hope-Frost Sir Stirling discussed his multiple F1 wins, around this most tortuous of circuits, as well as his Monte Carlo ralliy antics and record breaking win of the Millle Miglia with Jenks in the Mercedes 300SLR in 1955. 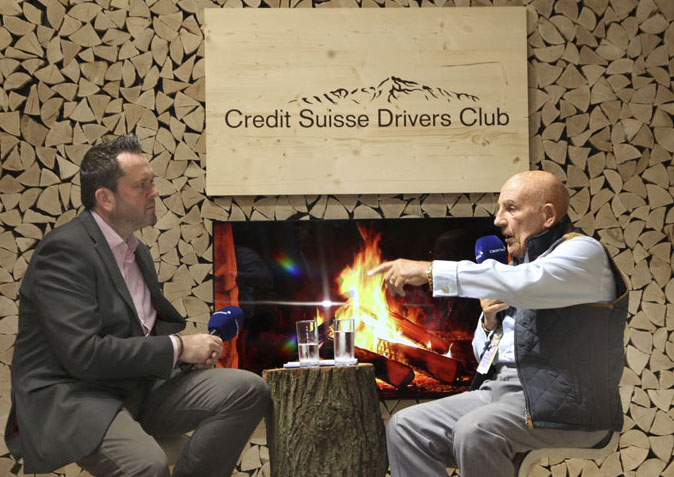 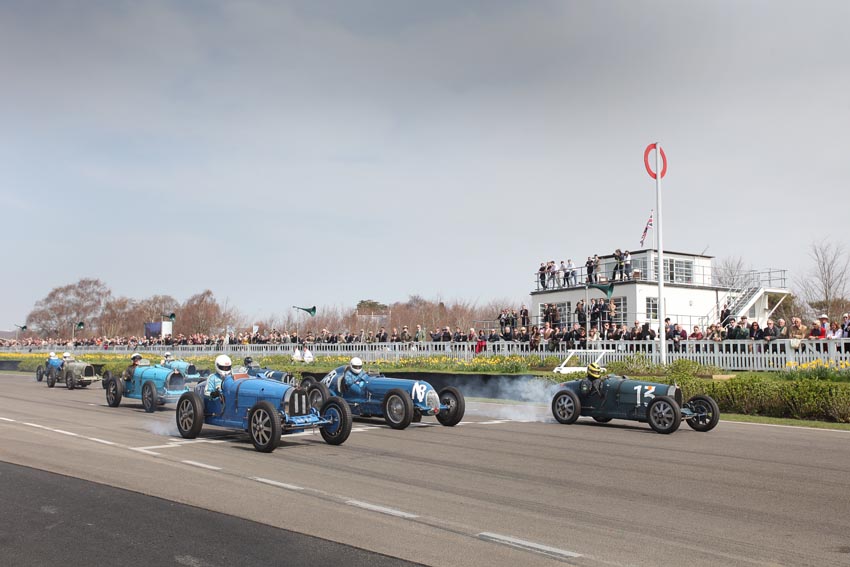